Scott Neville ’21 is networking his way up the ladder. As a current senior pursuing his bachelor’s in communication and media, Scott recently completed an internship through United Way’s NFL Partnership—but that’s not all. He’s also an independent filmmaker, who has been able to connect with individuals like Charlie Day to make his dreams a reality. Today, Scott joins us to discuss his experiences, his current projects, and his unique approach to networking.

Hi Scott! You’ve been more than a little busy—you recently interned for United Way’s NFL Partnership division as a website and data reporting manager. How did you find this opportunity, and what were you doing in your role? 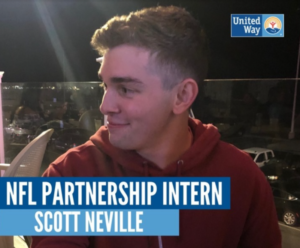 Hey! I found this opportunity on LinkedIn, and just applied like everyone else. My cover letter is what made me stand out, and it helped me get into the program alongside interns from schools like Harvard and Syracuse. My main responsibilities were related to blog content. I revised and posted all of the NFL partnership blogs that my intern team and I wrote for. I also hosted an online show called “United Way’s NFL Partnership Series,” where we interviewed NFL players and alumni about their work on and off the field. My boss, Tracey Holmes, really let us be involved in decision-making regarding social media, digital content, and even fundraising. I got to experience a lot of different aspects of the sports communications field over the course of the NFL season!

Wow, that’s an involved experience. I’m glad you got so much autonomy in your role! And prior to this, you were a part of the Fall 2020 cohort for NESN’s externship program. Can you tell us more about your experience? What skills have you taken forward with you from the Grand Slam Training Series?

I joined the Grand Slam Training Series as a resume booster, and applied before I got the job at United Way. The NESN externship is a good experience, because the HR team gives a lot of insight on what they are looking for—they, themselves, are strong connections. I think the course is better suited for younger college students, as they give a background on the transition from college to the workforce. That said, the program mostly reinforced a lot of lessons from my senior seminar, and from the Career Center.

You make a good point—when you already have some of the skills and experience, connections can be the most important part of programs like NESN’s GSTS. Looking ahead—you’re currently doing a directed study! Can you tell us more about what you’re working on?

My roommate Stephen Mottram and l are making a feature-length film. We wrote a 96-page original script, and we’re currently filming. The goal is to have the project done in time, to have a premiere before we graduate in May!

Best of luck with that! I can’t wait for the premiere. We heard that you met with Merrimack’s own Charlie Day to get some advice on your film venture—how did you make that connection? What did you take from your conversation with Day?

I did another directed study in the fall, where I interviewed sports personalities to learn more about the sports media and journalism industry. As I was getting interviews, I continued to improve my pitches and found ways to connect with these media personalities through a simple DM or an email. I started with Merrimack alum Chris Mason, and worked my way up to Jeff Passan, Ken Rosenthal and Adam Schefter. As I went, I developed a process for reaching out to these people that I had no business talking to. I shared these ideas and principles with Stephen, who reached out to Charlie Day through his agent. We’ve always had a passion for film, but needed some direction. A few hours later, we had a meeting with Charlie scheduled. We talked to Day about our film aspirations, and he encouraged us to take our idea and make it into a feature-length film. He even agreed to watch the film and give feedback later this year. Charlie Day gave a lot of great tips, but his best message was to just go out and do it. “You got an idea? Great, go write a script. Okay, now film it.”

You have such a unique approach to networking! How do you make these connections, or get your foot in the door, when the media industry is fairly hard to break into?

There’s no blanket message that will guarantee a response, but there are a couple of staples that work with most connections. Go into each message with a few things in mind: what platform will they have the best chance of seeing the message? Email is ideal, but hard to find sometimes. DMs are less likely to be seen, but you’d be surprised how many people with hundreds of thousands of followers get back to me. Next, make a pitch. Asking for an informational interview as a college student is the strongest overall approach I’ve found. Say you just need to ask roughly ten questions, and the interview can be done on a quick Zoom call. The real challenge is to have a good set of questions ready so the interviewee comes out of the call impressed. The back-end of the interview should have your best questions, so that they see that you’re really invested.

Then, you just need to occasionally reach out. With some of the connections I’ve made, I will text or DM them about content they are making or reference something we talked about. After I interviewed Jeff Passan, he sent me a message saying how I was on the right track and asking the right questions. I knew I had made a genuine connection in that interview.

I hope you realize how valuable this advice will be to anyone reading this! Seriously, this approach will get you far. Finally, Scott, as we wrap up—what advice do you have for your peers? Any shoutouts to make?

The biggest lesson I learned regarding networking was to not be afraid of failure. Sending a message to someone you look up to can be intimidating, but if you reach out, there are two main outcomes. If they say no or don’t respond, you are in the same position you were in before the message. If they say yes, you get a chance to learn from a mentor and build a genuine connection. The other big takeaway I had was to be “the right level of annoying” when networking. I learned this from Steve Perrault, who was one of my connections, and that mindset really helped me. You will need to get used to sending follow-up messages, which will increase your chances of getting a response. There’s a fine line between being persistent and being a pest.

My original directed study is called “Making Connections,” and it can be found on The Beacon if anyone wants to see how I navigated informational interviews. The movie should eventually be on Amazon Prime, but we do not have a release date yet.

When it comes out, we’ll be sure to watch! Thanks so much for your incredible advice—best of luck with all your future projects!

Are you ready to secure an internship or employment for the fall and beyond? The O’Brien Center for Career Development is here to help you! Visit Handshake today to search for open opportunities, meet with your career advisor, and more.