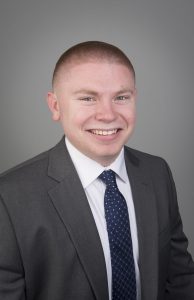 As James “Jimmy” Ritucci, Class of 2020 and majoring in business administration with a double concentration in corporate finance and accounting, nears the end of his undergraduate career at Merrimack College, he finds himself in the very position all students strive to achieve upon their graduation: equipped with the skills and experience necessary to stand out from the competition. He has already received offers for full-time positions before the close of his final semester of his senior year. Although Ritucci certainly possessed an impressive sense of confidence and skill sets from his on-campus involvement in leadership positions, the turning point within his career development journey began during his junior year, upon landing his first-ever internship experience. Following his attendance during his junior year to the Professional Development Retreat (PDR), an exclusive 2-day career initiative in Boston for juniors and seniors to connect with top industry professionals and well-connected Merrimack alumni in all fields, Ritucci secured a position with The Virtus Group based in Providence, Rhode Island, as a Wealth Management Intern for the spring of 2019.

During his junior year, Ritucci felt quite confident in the progress he’d already made in his professional etiquette and networking abilities from his experiences with the on-campus events, resources, and appointments he’d had with his career advisor. Still, he couldn’t help but feel compelled to begin to activate his career potential even further. Soon, Ritucci found the perfect opportunity to put his skills and career development to the test; “I had a lot of friends who had gone through [the PDR] and they had a great experience, and it really helped them when they were looking for and applying to jobs and internships in the future,” Rittuci explains. “So, I thought, ‘why not? It sounds like a good opportunity, why not try it?’ I’ve always felt it’s important to just put yourself out there with a positive attitude and put your best foot forward.” Ritucci soon realized that acting upon his, “why not?” impulse and applying to the PDR was the best thing he could have done for himself and his career development. “Before I went [to the PDR], I always considered myself as someone who was good at interviews, professional relationships, and things [of that nature],” he recalls, “but, if I’m being honest, I realized I was a little off [in my initial thinking], and that I still had so much to learn about networking, communication, [and other soft skills].” 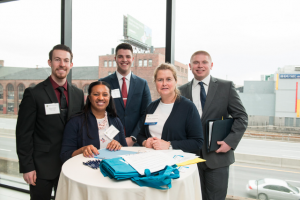 Following his attendance to the Professional Development Retreat, Ritucci became even more empowered by and confident in his networking and interviewing abilities and soft skills.

While at the PDR, Ritucci gained vital knowledge in his ability to not only recognize, but to actually utilize his skills to his advantage when applying for internship and job positions and how to display those abilities in a professional setting. “I didn’t realize how much I initially lacked knowledge in being able to apply all of my past experiences to make myself look better as a candidate,” Ritucci notes of the experience he most attributes to his current career success from the PDR. “The PDR definitely helped me to find out where my strengths are to make me a better candidate for the positions I was applying for, and how to use them in an interview or with an elevator pitch.” Ritucci especially emphasizes the value of crafting a well-developed elevator pitch; “an elevator pitch was something I’d always heard of, but it was never something I’d ever used [as a junior] and I was kind of nervous about using it, because I think one of the hardest things to do is to talk about yourself,” he expresses. “I feel like the PDR really did help me to get out of my comfort zone and be able to talk in a professional environment about my skills and to grow meaningful relationships with professionals.” Following his experience at the PDR, Ritucci feels even more secure and confident in the expansion and refinement of his networking, interviewing, and professional skills to ensure his ability to exceed the expectations of any future employers and succeed in any professional environment. 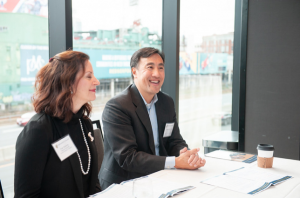 Ritucci explains he, “really took the opportunity to work on [his] networking”, while attending the PDR, and made valuable connections with professionals such as Derek Doo, from The Virtus Group.

Aside from the enhancement of his professionalism, Ritucci accredits the PDR for the opportunity to put his networking skills and newly enhanced confidence in his abilities to use in the event that would eventually lead to securing his internship with The Virtus Group. Ritucci, with his usual positive mindset and admirable valiantry, made it his mission to step outside of his comfort zone and begin developing valuable connections. “I really took the opportunity to work on my networking while I was there, and that’s how I met Derek Doo, who was a partner with The Virtus Group, where I eventually had my internship,” Ritucci recollects from his experience. Ritucci soon realized just how relaxed and engaging networking can truly be; “[Doo and I] just started talking about our interests at first. We were both sports guys; he played hockey and baseball here [at Merrimack], and I’m involved in club sports and intramurals on-campus, so we began talking about that, and then that’s what eventually led us into what my [professional] interests were.” 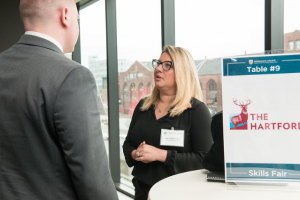 Since his internship with The Virtus Group and his attendance to the Junior Professional Development Retreat, Ritucci prepares to close his senior year at Merrimack College having already received full-time job offers from Aflac and Baystate Financial.

Doo and Ritucci hit it off, and Ritucci became pleasantly surprised with where his friendly conversation soon ended up. At the conclusion of the Professional Development Retreat, Doo mentioned the opportunity to serve as an intern at The Virtus Group. Ritucci maintains that his ability to secure an internship position, “was all about making that relationship at the PDR with Derek Doo, and then making sure to follow up with him and thank him.” Ritucci animatedly recounts of his discovery and securing of his internship with The Virtus Group. Ritucci emphasizes the undeniable necessity of fostering a connection made with any professional, particularly when offered a position. “I followed up with [Doo]…on the way back [to Merrimack from the PDR] on the bus,” Ritucci recalls. After a few weeks, Ritucci reached back out to Doo again. Ritucci states, “the biggest thing I got out of that was the importance of following up and putting yourself out there, because if I hadn’t followed up with him again, he wouldn’t have realized he never got back to me, and I may never have even gotten the internship opportunity.”

Now, as Ritucci faces several offers for full-time positions and reflects on all that lead him to his current career success, he stresses the importance for students to take advantage of their own career potential as early as possible. “My advice, especially for junior and senior students, is to try to start the job search as early as you can, and always try to plan to get ahead of everything’” Ritucci imparts to his fellow undergraduate students. “The more you keep pushing things off, the later you’ll find a job. Do your best to try and get something lined up for when you graduate, because the sooner you do find something, the more relieved you’ll be.”

Don’t wait to begin transforming your own career development into your career success with the resources available to you both on- and off-campus.  Apply to the Professional Development Retreat today to build up your strengths and soft skills, such as problem-solving, conflict resolution, critical observation, and adaptability, or schedule an appointment with your career advisor on Handshake to discuss your career development path. Applications for the Junior Professional Development Retreat, which are open to and encouraged for all majors, close this Sunday, February 9th, at 11:59PM – take the next step towards your career success!