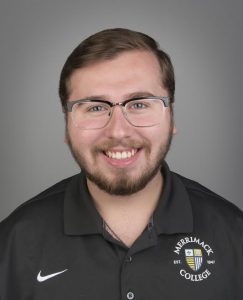 Theater Major and Religious and Theological Studies Minor Benjamin Mendonça, Class of 2020, has never been one to turn down an experience that allows him to expand and develop a new perspective to career success. As the OnStagers Production Manager, Stage Manager for Visual and Performing Arts Department, Production Assistant at the Rogers Center for the Arts, and a Residential Advisor for Royal Crest, Benjamin indisputably seeks to immerse himself in all that he can to broaden his perspective and knowledge as an aspiring managerial professional within the Performing Arts community. During the summer of 2019, Benjamin was nominated to attend the Kennedy Center American College Theater Festival due to his performance as a Stage Manager for the Rogers Center for the Arts production of “Noises Off”. His attendance at the Festival would eventually land the opportunity of a lifetime as an Intern in Pyrotechnics at the Stagecraft Institute of Las Vegas (SILV). As the fall semester kicks off, the O’Brien Center for Career Development had the pleasure of following up with Mendonça following his initial impression of taking on such a remarkable achievement, discussed in the Office of Communication’s piece, “With National Internship, Theater Major Leaps to Next Stage.”

The Kennedy Center American College Theater Festival provided Benjamin with the chance to present his binder of work and achievements in stage management to adjudicators within the Performing Arts community, where he could receive a scholarship or equivalent prize for his merit. While Benjamin received second place in presentations for stage management, his interview with a member of the program allowed him to stand out among the competition and ultimately score the opportunity to intern for the SILV. Despite his excitement in receiving the internship for Pyrotechnics, Benjamin admits an initial hesitance to attend the one-week program. He reveals, “for a while I was unsure if I actually wanted to do it, because I wanted to go into management in theater, so it seemed like there was nothing there for me. It was actually the reassurance of my academic advisor, Kathleen Sills, that I should go, and I honestly did find it beneficial to go into an area where I could learn more about the departments I’d be managing.” In addition to learning the ins and outs of the departments in theater, Benjamin received vital theatrical skills from his work with other interns and the Pyrotechnics company behind the Cirque de Soulis shows in Las Vegas, where they put together their own pyrotechnic performance.

SILV offers students a chance to handle pyrotechnics first-hand and work together to produce their own pyrotechnics display for a theatrical performance.

Although the opportunity to learn the behind the scenes of a real Las Vegas show thrilled him, Benjamin maintains that the true merit of the experience lay in the greater understanding he received in the realms of theater. Working in a specialized department provided him with an increased insight to improve upon his managerial capabilities, as Benjamin realizes, “I now know what these departments have to go through, and even though I didn’t learn specifically about management styles, I got to learn how to work with people and experience how professionals work in the real world, and also just learn more about the craft I work in. I didn’t realize how much there was to learn outside of what I want to and usually do.” In addition to expanding his professional skills in the Performing Arts and Pyrotechnics as well as his approach to stage management, Benjamin proclaims that stepping outside of his comfort zone in theater, “really gave me the reassurance I needed that this is the path that I do want to go down for my career.”

Benjamin further values the relationships and connections he built while interning for the SILV. Benjamin most appreciated the ability the institute provided for students to promote themselves to prominent individuals in the industry, as well as to each other. He states, “getting the opportunity to meet people you might get to work with later in life and to get your name out there was incredible. One of the gentlemen I met was a recent graduate, and he’s actually now the Head Sound Operator for Disney on Ice… I now have more people to reach out to and people who’ll reach out to me, and I even found people I’m looking to hire myself.” He concludes that the most favorable aspect of his experience revolves around the growth of a genuine network among the Performing Arts community, as he concludes, “it all comes down to the knowledge I was able to obtain and the relationships I was able to gain [from the SILV], and just getting my name out there and growing my experience.” 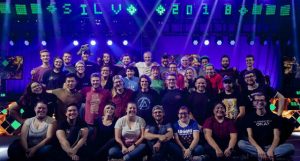 A photograph of the SILV program attendees of 2018.

As Benjamin reflects on his experience with the SILV and the connections he’s maintained, he feels he’s developed an improved approach to the challenges of achieving success in career development. Benjamin asserts that should a student receive any opportunity even mildly of interest, “[they should] take it. There’s no point in not doing things that could allow you to grow better as a person or an individual. I don’t think there’s ever an excuse not to learn something or not to better your knowledge on something…even if something takes an extra second out of your day to improve yourself, you should take that extra second.” He further affirms that taking on novel experiences allowed him to become comfortable with areas for self-improvement. Benjamin recognizes that, “you’ll never be the person who knows everything, so you should always be willing to grow and learn from every experience and encounter that you have.”

Benjamin’s internship with the Stagecraft Institute of Las Vegas illustrates that experiential learning opportunities offer more than just the technical skills necessary to perform well in the working world. While improving upon your expertise in the professional world certainly exists as a priority, the connections you create remains as assets that will set you apart in your career success. The only thing you stand to gain from passing up on an experience is a missed opportunity; thus, never forego the possibility for growth.