Liberal Arts student and Psychology major MacKenzie Miller, Class of 2020, has had an impressive presence on campus throughout her time at Merrimack College. As a dedicated First Year Experience Peer Mentor, Compass Peer Leader and Special Olympics volunteer, MacKenzie is certainly no stranger to taking on leadership roles. In the search for her next leadership position and for the opportunity to venture into the working world, MacKenzie had no hesitation in applying for and attending Merrimack’s annual Professional Development Retreat (PDR). The PDR is an exclusive, two-day career initiative for juniors and seniors to connect with top industry professionals and well-connected Merrimack alumni in the heart of Boston. After two days of refining and developing essential networking and other soft skills, MacKenzie soon landed a position as a Patient Observer at Brigham and Women’s Faulkner Hospital, which she received as a direct result of the PDR. 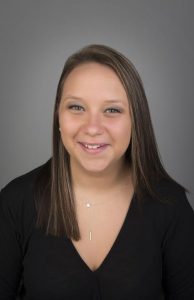 While attending the Professional Development Retreat, MacKenzie took advantage of every opportunity she could in order to advance her professional skills and confidence in a professional setting. She notes an overarching theme of a focus on strengths during the PDR that led her to perform so well during her networking and eventual interview with Brigham and Women’s Faulkner Hospital; “many workshops and discussions were based off of the five strengths given through an assessment. I learned how to better talk about my strengths and how I would utilize them in the workforce. The Professional Development Retreat not only focused on our strengths and weaknesses, but also how to turn those weaknesses into strengths.” MacKenzie recalls a recurring weakness of her own that she came to transform into one of her greatest assets to her own professionalism, stating, “[in the past] my weakness has always been struggling to make a conversation flow in networking. The Professional Development Retreat gave me practice with my peers, alumni, professors, and professionals in networking, and I’ve learned how to keep my  conversations going in a productive way.”

Furthermore, MacKenzie considers how working on her confidence at the PDR attributed to much of her success at the Skills Fair, where she would soon encounter her future employer. The Skills Fair is a unique opportunity for students to network with companies based on the 2019 National Association of Colleges and Employer’s Career Readiness Competencies, as opposed to just open positions at the company itself. MacKenzie’s conversations with alumni and preparation in networking with employers ultimately provided her with the insight she required to stand out among her peers in the applicant pool. She affirms, “I found that going in confident and prepared was the best way to navigate the Skills Fair. I targeted certain companies I would like to talk with and brainstormed questions I had before approaching them. I learned the importance of following up with a recruiter at the retreat as well. A Merrimack alumnus at my table described how meaningful it is for a person to follow up — so important that it makes the person stand out and come out on top of other similar candidates.” 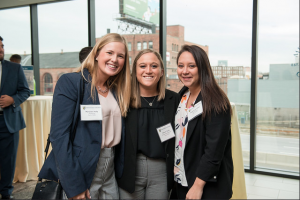 As the two-day retreat concluded, MacKenzie gained the clarity and confidence she needed to seek out an employer she desired to work for and rise to the top of their considerations for open positions. MacKenzie fondly portrays her initial meeting with Partners HealthCare of Brigham and Women’s Faulkner Hospital at the PDR, as landing a position with the company meant gaining desired experience while additionally satisfying a personal connection to the hospital; “Partners HealthCare caught my eye right away. I knew what the company was because they had cared for my grandfather, and I was looking for a way to give back to the company. Once I felt confident enough from the past two days of workshops, I went up to meet the spokesperson from the company. I went with questions planned and luckily found the conversation to flow. After the retreat concluded, I followed up by email to see what positions they may have open for the summer.” Once MacKenzie received the good news that she had hoped to hear regarding open positions, she filled out an online application. As her phone and in-person interview dates arrived, MacKenzie found herself as prepared as ever, confident in her newly obtained skills from the Professional Development Retreat to excel throughout the discussion. She reveals, “during my interview [with Brigham and Women’s Faulkner Hospital], the main question was, ‘What is your biggest strength?’ I smiled, and I knew the exact answer to give, and I had practiced it with confidence. I went into the interview confident of the skills I recently learned at the PDR and scored the job!”

Although MacKenzie’s development of her professional skills proves quite the advantageous feat, her experience as a Patient Observer with Brigham and Women’s Faulkner Hospital has further allowed her to improve her skills in the industry she plans to enter upon graduation as well. MacKenzie observes her own growth in her abilities, mindset and performance as a caretaker following her internship, stating, “I have been exposed to a variety of patients, [and] I have grown to understand people and their differences. I’ve also been exposed to real life situations of text book readings I’ve learned about in-class, and I’ve utilized knowledge taught to me by my professors to better approach people and have a better understanding of everyone’s story. This experience has clarified a lot for me in my career interests, and one day I hope to care for patients in need just as I see nurses and doctors do daily.” 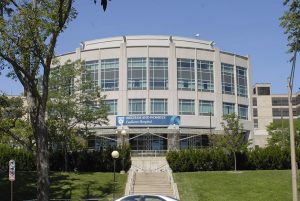 MacKenzie concludes her recollection of career success with guidance for students looking to strengthen their career development. She advises, “every student should go to the Professional Development Retreat because it helps you to build skills and practice being a professional in a comfortable environment. I think it’s extremely important to get into the workforce as early as possible, as building networks and connections will help you achieve your career goals.”

MacKenzie’s ability to mold her career development to best suit her interests for her future serves as a paradigm for achieving career success. Working towards confidently presenting yourself and your skills professionally remains one of the most vital assets to realizing your full potential as a competent individual in the working world. MacKenzie’s experience of navigating the Professional Development Retreat and landing her position as a Patient Observer indicates that the link between the skills you possess and goals you wish to achieve lie in the self-assurance of your qualifications and experiences. Practice in professional settings arises the confidence to attain any career goal you seek.

The application for this year’s Professional Development Retreat for the Class of 2020 is available now! Click here to apply to this opportunity. Applications close on Sunday, October 6 at midnight.