Samantha Pineo, senior at Merrimack College, found herself immersed in a new experience provided by the O’Brien Center for Career Development this past November.

The Professional Development Retreat, also known as the “PDR”, is a two-day career development initiative designed to build emotional intelligence and provide students with soft-skills, such as problem solving, conflict resolution, critical observation and adaptability. Along with these skills, juniors and seniors of Merrimack develop their networking, career and interview skills as they prepare for a life after graduation.

Samantha is majoring in History, and minoring in Pre-Law as well as Political Science. “Prior to applying for PDR, I had assumed that the PDR was mainly for business students. It didn’t seem like something that would apply as much to me and what I’m studying,” Pineo said. 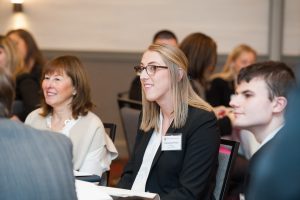 However, after receiving emails from the O’Brien Center for Career Development as well as talking to friends about their experiences from the Professional Development Retreat, she decided to investigate further. Pineo stated, “A previous professor reached out to me and really encouraged me to apply because it would be good for strengthening my soft-skills. Once he contacted me I made the decision to apply.”

Pineo was accepted into the retreat after applying. Upon arriving to the hotel on the first day, she knew she made the right decision. Samantha noted that the Professional Development Retreat exposes students to more opportunities. “Everything you do at the PDR is a networking opportunity – whether it’s with people in your class, experts in the field or even with faculty at Merrimack,” she said. “I got tangible things out of PDR as well: activities that made us work together in a group and connect with judges using our communication skills.”

Aside from being grateful for the opportunity and experience that the Professional Development Retreat afforded her, Samantha also found herself connecting with Senator Barry Feingold’s campaign manager, MaryRose Mazzola, a Merrimack College alumna, at the networking reception. From this experience, she landed an internship working on the campaign and finding further connections that continue to grow her professional network. Samantha’s success is an example that the Professional Development Retreat helps to build the strengths of all students, in any major, at Merrimack College.

Pineo explains “Networking was the most intimidating aspect of the PDR. The whole day is set up for you to be confident in your ability to communicate with professionals and the PDR really helps you break down that wall.”

The Professional Development Retreat helps students increase their confidence, especially while networking. It is this that helped Samantha in succeeding beyond her previous expectations.  At first, she found herself wary of even applying to the Professional Development Retreat, but with the encouragement of others and fully immersing herself in the experience, she was able to grow professionally in her career.

“I’ve learned to tailor my soft-skills. I definitely feel more confident in speaking in public and personal settings and being able to come to PDR and learn all of that has been great for my professional life ahead, but also my time still spent at Merrimack.”