Exploring Your Growth Potential: A Recap of “Create Your Career: Climbing the Corporate Ladder”

On March 3, the O’Brien Center for Career Development held its first installment of the new “Create Your Career” series, entitled “Climbing the Corporate Ladder!” The morning session began with an introduction by Joe Jenkins, assistant director of career advising. The professionals in attendance were a blend of alumni and local business representatives.

“Some of our Merrimack alumni have really moved up the ladder; that’s why we’re here,” said Fran Doherty, director of talent acquisition at Lincoln Property Company. Alongside Fran was J.J. Mann, managing director of the National Financial Network, and two alumni: Mary Katherine Sullivan ’11 M’13 and Kayleen Walberg ’17. Professor Jenkins highlighted these two in particular, noting that our alumni aren’t just successful—they’re having fun! Sullivan seemed to agree.

“I attended events like this as an undergrad, and I’m coming back even now,” she said. Sullivan currently holds a position with Workboard as a enterprise customer success manager.

“I got my original co-op with Bose from a networking event at Merrimack,” added Walberg. After her success at the O’Brien Center’s event, she stuck with Bose Corporation and rose through the ranks to her current position as a concept owner. Both alumni stressed that Merrimack had given them a lot of valuable opportunities. Now, a few years removed from their undergraduate career, they were more than happy to give back to the Warrior community however they could. 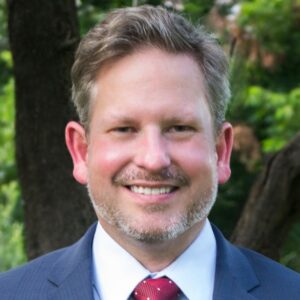 After introducing our incredible panel of guests, the event finally began! Students split out into four breakout groups of their own choosing, picking the alumni and representatives they felt best fit their own interests. In a Zoom room filled with burning questions, the passion of the alumni and students alike really shone through. In Walberg’s breakout session, she began with a simple question: why were we here? What were we hoping to gain from this day?

“I’m just trying to network as much as possible before I graduate,” said Nicholas Walsh ’22. Just a few minutes later, he mentioned to Walberg that he’d applied to Bose for an internship, and was curious about the hiring timeline. Walberg, without hesitation, offered to connect him to some of her peers in the company. Any attempts to network were already paying off! However, Walberg stressed that internships are key.

“I made sure I had the time and space for a co-op in my schedule, because it was really important to me,” she said. “People value real-world experiences—and in any internship, you’re not just limited to your team! You can network internally within the company.” Networking helped Walberg immensely—through her connections, she always had people in different divisions of Bose advocating for her, and finding positions that would help her grow professionally.

“Higher-ups want people who are passionate and connected. They want growth potential,” she added. “Find companies who care about your growth, because they’ll value passion and work ethic over experience.”

As the first rotation came to an end, many of us chose Fran Doherty’s group next. Walberg’s final sentiments echoed through in her introduction.

“You’re the generation that’ll change the future,” Doherty said. She went on to discuss her view of Lincoln Property Company as a baseball team for employees. Just as baseball players train in minor leagues and move on at their peak, she sees her organization as transitory, but vital.

“I’m not looking for any particular majors when I recruit—I’m looking for people who want a career path,” she said. “We bring people in and train them to move on. When someone reaches their peak, they move on, we bring new people in, and it’s a cycle of constant motion.” Doherty herself graduated with a bachelor’s in English. She admitted that when she first graduated, she had no idea what to do. She knew that teaching wasn’t her passion—but where could she go from there? Eventually, she fell into property management. The multitude of options and avenues excited her; she’s stayed in the field since. 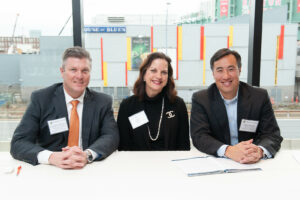 “Every single day, I’m challenged both personally and professionally. No two days are alike! Things always change,” she said. Walsh and another student in attendance, Zoe Driscoll-Sbar ’21, pressed further into that. They wondered what exactly had changed, and what would remain in our future “new normal.”

“We had to shake up everything—how we advertise, how we recruit. And we needed to protect our staff and our team above all else,” Doherty said. “But some things are convenient.” She cited long drives and a constant commute as a former vestige of her job, always meeting job applicants for interviews. “Zoom is convenient, it’s a time-saver.”

This round ended shortly after, leaving on a positive note as Driscoll-Sbar and Doherty connected about the former’s career aspirations in business and human resources. We joined the next room—with Mary Katherine Sullivan—a minute later, coming on the tailend of her round.

“Internships are a playground,” she said, before introducing herself to the new arrivals in the room. Sullivan had a really insightful philosophy around internships!

“The perfect job, the perfect internship—it doesn’t exist,” she said. “When I look for jobs, I break the listings down to figure out what I’m interested in. Which components are the right fit for me, and how will I focus on them?” She assured us of one thing: internships are short. More importantly, their short nature gives young professionals the opportunity to shop around and try new things, without a year-long time commitment. If the internship someone wants isn’t available, taking on adjacent positions can help students meet mentors and advocates, which in turn will lead to valuable references. Sullivan’s work is, in itself, fairly salient. She works in the tech startup industry, where she can help small organizations grow and develop before moving on to a new venture.

“I like startups because they’re kind of like Merrimack,” she admitted. “The feel, the vibe—the community’s very similar.” Sullivan discussed the importance of feeling known and valued in her work; this extended from her time on-campus as a student, in our intimate residential culture. When asked about discovering her passion for technology, she cited two summer internships with the MITRE Corporation in Bedford, MA. Working in the innovation lab and getting to meet other students and professionals from schools like MIT, it became clear to Sullivan that she wanted to stay in the field for good. While her passion lingered, she’s had to make some adjustments. 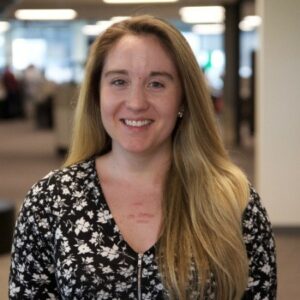 “I used to always be on the road. That’s been a big change,” she said. “But I’m actually liking it, in some ways. I’ve gotten to have conversations with people I’ve been trying to talk to for a long time!” Julia Tyler ’22 empathized with Sullivan, discussing her own experience with a remote internship over the summer. It led to another question: how does a company build culture right now? This felt fitting for Sullivan, who placed so much value in company culture. She admitted it was difficult, but that like many, companies everywhere were adjusting to socially-distanced, virtual environments.

Emily Hawley ’22 had a compelling question about our new virtual environment, though: how do college students make it work? With many residential students having roommates, and common spaces becoming less available due to safety guidelines, dorm-room interviews can be a tricky topic. In particular, Hawley was concerned about being able to find a position right out of college. But Sullivan’s answer was simple: communicate!

“I live with my sister,” she said. “We needed to figure out how to make things work with us both there! We found ways to do that—she’d put on headphones when I was on the phone doing my thing, and solutions like that.” She hesitated for a moment, before addressing Hawley’s concern about the job search. 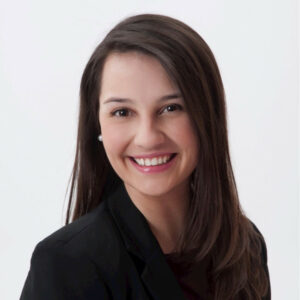 “I used to always be networking—at conferences, I’d see so many people, and I’d get to know them. There was a lot of room to explore,” Sullivan said. But while in-person meetings and conferences aren’t happening, there’s still room to network. We were all in a virtual space together, and it seemed like the students in attendance all found at least one company rep or alum to connect with on a personal level. We were encouraged to continue the conversations we’d had on LinkedIn. With that, the morning’s event began to wrap up.

As students filed out, new connections in virtual hands, I asked our business career advisor, Morgan Phipps, for her closing thoughts on the day.

“When I was a student here, I wish I’d gone to more events like this—it’s different at Merrimack, because networking, career development, it’s a part of the campus culture,” she said. “There’s a full cycle—students come to these events, they gain something valuable, become alumni, and then they return over the years to help with these events from a different perspective.” With any luck, we’ll see the same cycle with the Class of 2021 and 2022, returning after graduation to discuss their own career journeys—and to influence the rising classes for years to come.

Are you ready to secure an internship or employment for the fall and beyond? The O’Brien Center for Career Development is here to help you! Visit Handshake today to search for open opportunities, meet with your career advisor, and more.