The 5th Annual Liberal Arts Career Night (At A Distance), Through the Eyes of a Current Senior

If you’ve been an O’Brien Center groupie for a while, you may have seen last year’s recap of our 4th Annual Liberal Arts Career Night! Perhaps you even attended — and if so, were able to network with the 21 brilliant alumni present on that October night. You might have made acquaintances, important connections, or even promises to reconnect at the next annual event. We had no idea that just six months later, we would enter an unfamiliar virtual landscape, uncharted territory for students, staff, and alumni alike. But as shown time after time, Warriors are tenacious. We returned to campus in late August, and the staff has worked tirelessly since then to create engaging and meaningful opportunities for the student body, at a distance. This determination brought about one of the most innovative events in O’Brien Center history: the 5th Annual Liberal Arts Career Night. 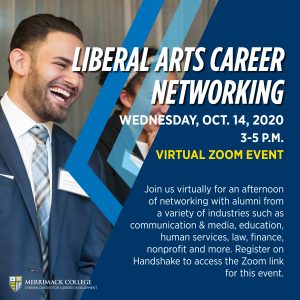 Our flyer for the 2020 Liberal Arts Career Night.

This year’s Career Night took place over the course of two hours, occurring entirely over Zoom. Students were sorted into four breakout rooms, each hosted by one liberal arts alum. Our alumni leaders included Megan Cahill ’12, Josh Carroll ’05, Peter Kontakos ’04 and Angela Milinazzo ’11. Each group had about 20 minutes to make introductions and ask questions of their room’s alum, before rotating to the next room of students. At the end of the night, some students hung back for a smaller group discussion with an alum of their choice, while others connected over LinkedIn.

You may wonder: did it feel weird? The answer: yes, but also, not at all! Virtual events will never feel quite the same as an in-person gathering; but does that make them less valuable? At a typical Liberal Arts Career Night at Merrimack, you might slip into the Rogers Center five or ten minutes early, or even late — you’d listen to the keynote speaker, and flit between tables for a chance to talk one-on-one with the alumni that interest you. Many students come to these events with an idea of what they want to do after graduation, and that frames who they speak with. This year, the virtual format shook things up. We had a smaller pool of alumni, but we were also encouraged to speak with all of them. This diversity of voices led me to think about the nature of liberal arts. In attendance, we had lawyers, therapists and marketing professionals alike. What bonds these walks of life together? How do they fall under the liberal arts “umbrella”?

It’s simple: versatility. Josh Carroll cited this in our group discussion, after I asked him how his degree in political science had impacted his career development as a lawyer.

“It didn’t,” he said. He went on to discuss the importance of a liberal arts education over all else — any major under the School of Liberal Arts would have given him the critical thinking skills crucial to his profession. Full disclosure: I’m an English major, and just the thought of law school terrifies me. But Carroll was the first alum I spoke with, and he assuaged a lot of the anxieties I felt about my own education. 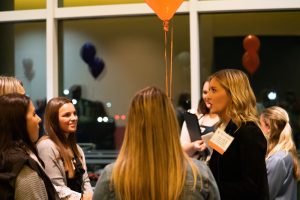 A photo of students and alumni mingling at last year’s Liberal Arts Career Night, in October 2019.

“I knew what I didn’t want to do. But I didn’t really think about internships,” he admitted. “I mowed lawns during the summer.” Carroll, now an associate at Ropes & Gray LLP, sits on the College Leadership Council at Merrimack. But he warned students not to follow his example as an undergraduate. “Those I knew who did internships, they got full-time offers and jobs before anybody else.” He praised those of us in attendance, highlighting the importance of attending networking events like this. Merrimack alumni in particular, he said, have a penchant for standing by each other. Even today, Carroll still meets and connects with fellow alumni from as far back as the Class of 1986.

Angela Milinazzo and Peter Kontakos echoed many of Carroll’s sentiments on the liberal arts, as they teamed up for a final breakout session with me and several others.

“There are so many vital skills in the liberal arts. You learn to communicate, to captivate — to tell a story,” said Milinazzo, a marketing manager at campusSIMS. A former fellow English major, she laughed over the near-endless papers she wrote as an undergraduate. “Shout out to Dr. Scherwatzky! He was one of my favorites,” she said, speaking of Associate Dean Dr. Steven Scherwatzky.

“You can figure out the technical skills later,” said Kontakos, agreeing with Milinazzo. He touched upon the core skills of a liberal arts education — skills that take time and discipline to master, but also offer a transferability essential to career exploration. Kontakos’ liberal arts foundation allowed him to climb the ranks in Massachusetts’ government, where he now serves as the deputy district director of the US Small Business Association. Both Milinazzo and Kontakos repeatedly emphasized the importance of critical thinking skills for any field.

“I monitor customer service data, and if I see the same issue over and over, I think about it: why are customers always having that issue?” said Milinazzo. “It’s a useful skill to have, no matter what.” 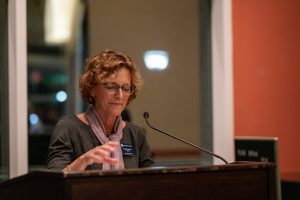 The Dean of the School of Liberal Arts, Dr. Karen Ryan, speaking at last year’s event.

Carroll, Milinazzo, and Kontakos all shared one thing in common, beyond their liberal arts education: their love of Merrimack. But no one expressed a fierce admiration for the school like our final alumna of the night, Megan Cahill.

“Merrimack’s like a family,” she said, when asked why she returned to volunteer at Career Night. “I made important connections in my time there. I would’ve stayed at Merrimack for grad school if they had my program!” Cahill, who holds a master’s degree from Boston College and now works as a psychotherapist at Family Counseling Associates, also pushed the internship hunt for current students. She talked about how she needed clinical hours for her degree and licensure, but reminded those present that internship experiences would help “immensely” in finding post-college opportunities. When asked about how she developed her professional life at Merrimack beyond work experience, Cahill cited networking.

“Networking helped a lot coming out of school, because everyone needed hours and internships,” she said. The words rang true for my group, as we considered the valuable advice and connections that Career Night had provided for us thus far.

As the night came to a close, it felt a little unreal — we just had these deep, thought-provoking discussions, and soon we’d be logging off and re-entering our own worlds of living rooms and dorms. The alumni reflected on how Merrimack had changed, discussing its evolution as “night-and-day.” Cahill noted the O’Brien Center, in particular, for how quickly it had grown since her graduation in 2012. They all had some parting wisdom, as well. 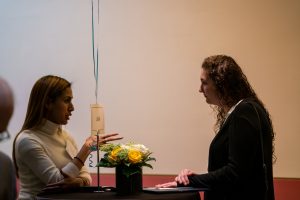 An aspiring law student chatting with an alumna at last year’s event.

“Be discerning, but cast a wide net. You deserve a good internship,” said Carroll to Sara MacFarland ’22, an aspiring law student in the room.

Milinazzo also addressed an aspiring graphic design student, advising him that “communication is key,” and talking about her own experience as a client of designers.

I logged off shortly after, leaving a small handful of peers to continue chatting with the alumni. I thought about the words of a freshman in attendance, Madelyn Whelan, when introducing herself to Carroll.

“I’m here because I gotta learn this stuff,” she told him. The comment was small, but it stuck with me. We were all there to learn something — the alumni included. They seemed as interested in us as we were fascinated by them. Carroll’s admiration of the alumni relations at Merrimack suddenly made even more sense; even now, I’m speaking with him and Milinazzo over LinkedIn. We all received incredible guidance, and in turn, gave the alumni a glimpse into the current classes of their alma mater. We reflected their career diversity ourselves, ranging from design, to law, to education. And together, we developed a collective understanding of what it means to be a student of the liberal arts.

Don’t miss out on other upcoming networking events for the perfect opportunity to aid in the development of your career exploration and network – see the full list of opportunities here!