Undergraduate student Denis Davydov, Class of 2020 and majoring in civil engineering, entered his junior year at Merrimack College with the determination to enhance his career potential and gain vital experience in the working world. While Davydov began his career development by taking advantage of certain opportunities such as becoming a member of Merrimack’s Chapter of the American Society of Civil Engineers (ASCE), he nevertheless sought to immerse himself in an opportunity to experience the engineering industry first-hand. As his senior year approached, Davydov reached out to his career advisor at the O’Brien Center for Career Development, Laura Thibodeau, for advice on the steps he could take to advance his career development and secure an experiential learning opportunity in the engineering industry. 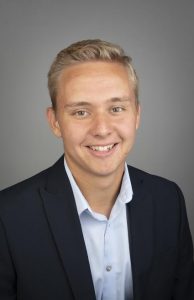 Denis Davydov, Class of 2020, majoring in civil engineering, thrived in an incredible experiential learning opportunity with MassDOT for the summer of 2019 as a Structural Engineer Intern.

“Last November, I visited a career fair in Boston, which Laura [Thibodeau], my career advisor, encouraged me to participate in,” Davydov recalls of the process of discovering his experiential learning opportunity with the Massachusetts Department of Transportation, MassDOT, as a Structural Engineer Intern. Davydov details the importance of networking as an opportunity to learn about potential career paths, as well as to help make a positive impression upon potential employers. Davydov drew upon his core foundational skills to network with employees at MassDOT during the career fair, stating that, “I met with representatives from MassDOT [at the career fair], and we had a great conversation. One of [the representatives] even described the internship positions they had available, and showed me where to apply.” Following his attendance to the career fair and his discussion with the representatives of MassDOT, Davydov resolved to submit an application to MassDOT for an internship position for the summer of 2019.

Soon after his conversation with MassDOT representatives and the submission of his application, Davydov received the opportunity to have a phone interview with several engineers employed at the firm. Although interviews often seem nerve-wracking, Davydov nevertheless felt confident in his skills and ability to demonstrate and discuss his achievements. Davydov encourages students not to become overwhelmed by the stress of the interviewing process, despite how daunting the task may appear; for, in reality, the interviewer simply seeks to learn more about the prior experience of an individual and get a sense of who they are. Davydov certainly impressed his interviewers with his composure and confidence while elaborating upon his capabilities, and secured the position as a Structural Engineer Intern for MassDOT for the summer leading into his senior year. 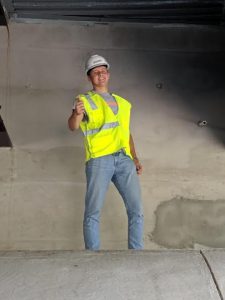 Davydov received vital hands-on experience performing structural analysis, design, construction review, and a multitude of other tasks to refine his skills for the working world.

Davydov thrived in the knowledge, hands-on opportunities for analysis and constructability, and with the colleagues he encountered throughout his internship experience with MassDOT. Davydov’s internship allowed him to participate in the completion of projects that provided tangible results for him to measure his own progress. His colleagues even presented him with the ability to perform a variety of diverse tasks in order to both sharpen his current professional skills, as well as to develop an increasingly versatile, technical skill set to succeed in any future position. Davydov conveys, “my experience at MassDOT was fantastic. The people are extremely helpful and intelligent there. I gained so much knowledge in every aspect of the engineering profession, and I experienced almost every possible sphere of bridge engineer work [during my internship]”. After receiving the ability to exhibit and strengthen his skills throughout his internship, Davydov felt ever more assured of his chosen career path and his potential to succeed in the working world upon his graduation in May 2020.

Davydov certainly attributes much of his career development and success to his classes and the professional events hosted by the O’Brien Center for Career Development. Davydov unequivocally possesses the aptitude and diligence to succeed throughout his academic and professional endeavors; however, he feels the resources made available to him at Merrimack College played a significant role in his ability to realize and attain his career goals. He stresses that, “I would not be able to get [my internship with MassDOT] and gain such an important experience without Merrimack’s support. My classes helped me to gain the technical skills and preparation I needed [to succeed in my position], and the professional skills I gained at the Professional Development Retreat (PDR) were crucial factors for me to even be a part of the MassDOT team.” Davydov maintains that the PDR allowed him to enhance and develop vital skills to succeed throughout the entire process of securing and working in his internship with MassDOT.

Davydov’s experience with MassDOT demonstrates the monumental value of utilizing available resources on and off campus to advance career development into success. The ability to experience a variety of professional opportunities and develop essential skills for the working world exist all throughout one’s network, career events, and on-campus resources; simply take advantage of the opportunities around you to advance the development of your career.